I did it! I made dishwasher detergent! Yay me! I know I'm way  more excited than I should be on this one but I'm finding making stuff on my own/"off the grid" is extremely satisfying, exciting and economical! I hmmmed and hawwwed over what recipe I would use and finally decided on one. I halved it to make sure it would work for us since different people report different findings. I think it really has to do with how hard or soft your water is and even what type of dishwasher you have.

What's the big whoop with conventional detergents?
Phosphates! "Once phosphates are discharged into the environment, they promote algae growth in local waters. These sudden blooms of algae trigger a process called eutrophication in which local waters become starved of oxygen and devoid of life. This issue is of special concern to anyone living near a lake or pond," writes Seventh Generation, a maker of phosphates-free soaps. You can read more about aquatic dead zones here

Phosphates used to be in laundry detergent but soap makers changed their formulation years ago. Now the same is finally happening with dish detergent with some companies voluntarily banning their use. Either way I still don't really trust big names. At the very least they all contain artificial fragrances which aren't very good to be breathing in. I even read a few articles that Cascade's new formulation is ruining some people's dishes and dishwashers! I dunno but making my own was so easy and cheap I don't think I'll be turning back!

Here is my recipe:
1 cup Borax (Can be found in the laundry isle at grocery stores. I got mine at London Drugs. It was 2kg for $6.99)
1 cup Washing Soda (Also found in the laundry isle. Again got mine at London Drugs. It is not the same as baking soda so don't subsitute it with that. 3kg for $6.49)
1/2 cup Citric Acid (Had a hard time finding this in Squamish. I got it in NB at a brew it store. Yesterday I came across is at Nester's though in the Asian spice section. 1kg for $10)
1/2 cup Kosher Salt (I used Sea Salt.... not sure if it would differ to use Ionized Salt or not...)
1 tsp White Rice (you don't need to do this but apparently it helps the batch from not clumping due to to citric acid. It won't hurt your dishwasher at all)

Use 1 Tbsp per load or adjust as per your need. Also fill the Jet dry compartment with white vinegar. It will act as a natural rinse agent... and no your dishes won't smell like vinegar after I promise. 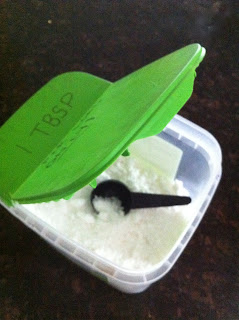 There were some Dishwashing tabs onsale this week  at Save On... I did a little math and it works out to 24 cents a load.

This particular recipe will produce 48 loads and according to my excellent math abilities I figure it's about 4 cents a load. If you turn on your dishwasher once a day then you stand to save about $75/year or more depending on the type of detergent you use (green ones tend to be even more expensive) and if you normally get good sales. Not only that, it is non toxic and saves lots of plastic containers destined for the landfill. You can use the Washing Soda and Borax for many other household cleaning products including Laundry Detergent.... which I also made!

If you want to try some and you're in the area then come on by!
Posted by Kelly Evans at 10:47